‘For the want of a nail’, David Ogilvy, and secrets to writing headlines that get your copy read (#4)

One of my favorite proverbs is often attributed to Benjamin Franklin. You have likely heard it. It’s the ‘For the want of a nail’ proverb.

The message is clear. Seemingly unimportant acts or omissions can have grave and unforeseen consequences.

There are several other well-repeated proverbs with the same message.

“A stitch, in time, saves nine”

“An ounce of prevention is worth a pound of cure”

The History of ‘For The Want of a Nail’

What I find fascinating about the ‘For the want of a nail’ proverb is that it’s old. Many forms of the proverb were in use before Benjamin Franklin published his version. Franklin’s version was published in Poor Richards Almanack, June 1758.

The oldest version of the proverb is attributed to a German poet, Freidank. Freidank was the author of Bescheidenheit (“practical wisdom, correct judgment, discretion”). His work was popular in the German Middle Ages. Today you can find many manuscripts, as well as a Latin translation. Bescheidenheit was published around 1230.

Below is Freidank’s version of the proverb.

‘For The Want of a Nail’ in Popular Culture

What I take away from all this is that if a proverb has been going around for a good 800 years, you should pay attention! Even today popular culture transmits the proverb. Check out this clip from The Fast and the Furious: Tokyo Drift (2006).

Within digital marketing the ‘For the want of a nail’ proverb has resonance. It can be applied to so many core elements of the discipline. One of the best examples of where the proverb fits is the writing of headlines.

The Best Headline of all time?

According to copyblogger.com, only 20% of people who scan your headline will continue reading your content. My guess is that this number will get worse as time goes on. Why? The saturation of the online world.

If you want your content to read, you have to start creating headlines that your readers can’t ignore. One of my favorite headlines is by advertising legend, David Ogilvy. It was for Rolls Royce.

“At 60 miles an hour, the only thing you hear in the new Rolls Royce is the ticking of the dashboard clock …”

According to lore, he rewrote the headline more than 100 times! 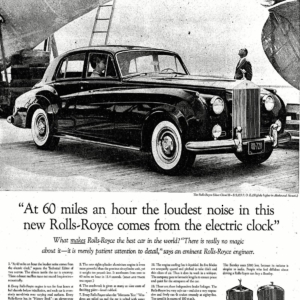 How to Write a Great Headline

Want to join the discussion?
Feel free to contribute!

Quote of The Week

“Good ad; all facts. No adjectives. All specifics. Sold a lot of cars.”― David Ogilvy

The law of unintended consequences and ‘Numa Numa’ It’s All Subjective. ‘Your Honor’ Miniseries and Super-Af...
Scroll to top

This site uses cookies. By continuing to browse the site, you are agreeing to our use of cookies.

We may request cookies to be set on your device. We use cookies to let us know when you visit our websites, how you interact with us, to enrich your user experience, and to customize your relationship with our website.

Click on the different category headings to find out more. You can also change some of your preferences. Note that blocking some types of cookies may impact your experience on our websites and the services we are able to offer.

These cookies are strictly necessary to provide you with services available through our website and to use some of its features.

Because these cookies are strictly necessary to deliver the website, refuseing them will have impact how our site functions. You always can block or delete cookies by changing your browser settings and force blocking all cookies on this website. But this will always prompt you to accept/refuse cookies when revisiting our site.

We fully respect if you want to refuse cookies but to avoid asking you again and again kindly allow us to store a cookie for that. You are free to opt out any time or opt in for other cookies to get a better experience. If you refuse cookies we will remove all set cookies in our domain.

We provide you with a list of stored cookies on your computer in our domain so you can check what we stored. Due to security reasons we are not able to show or modify cookies from other domains. You can check these in your browser security settings.

These cookies collect information that is used either in aggregate form to help us understand how our website is being used or how effective our marketing campaigns are, or to help us customize our website and application for you in order to enhance your experience.

If you do not want that we track your visit to our site you can disable tracking in your browser here:

We also use different external services like Google Webfonts, Google Maps, and external Video providers. Since these providers may collect personal data like your IP address we allow you to block them here. Please be aware that this might heavily reduce the functionality and appearance of our site. Changes will take effect once you reload the page.

The following cookies are also needed - You can choose if you want to allow them: